Pallet Inverters form a natural element in any pallet-less loading system. By inverting the product 180 degrees, you can retain your own pallets in-house and load containers in double-quick time. An ideal system for product which will be hand-balled out at its destination. 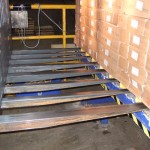 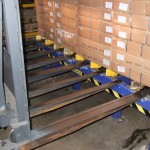 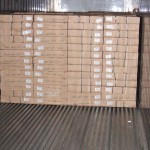 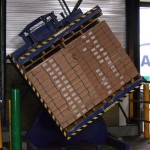 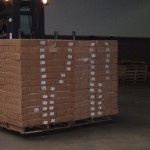 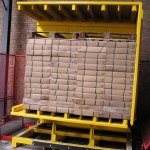 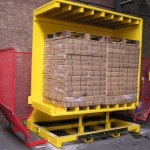 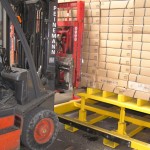 With the increased implementation of ISPM 15 regulations, BBJ sees a much greater likelihood that exporters will want to avoid the cost of shipping even more expensive wooden pallets, and can now offer numerous methods of palletless loading of product into containers.

Sending loads on pallets to destinations where they are handballed out anyway has always been a costly exercise, the only benefit being the initial convenience of loading. If the pallets now need to conform to ISPM15, the extra expense will justify a much closer look at alternatives. The increased cost of wood will only add to the argument.

The original Palletless Loading System consists of a 180 degree inverter with a built-in pusher on the sidewall. The pallet is gripped and the load inverted. A forktruck equipped with a pusher attachment and broad platens receives the load from one side and drives into the container to discharge. Meanwhile, the system is reinverting the empty pallet dispatching it to the opposite side and stacking it up.

A simpler alternative is to fit raised ribs to one table of the inverter allowing access by a multi-tyned truck again fitted with a scissor push to discharge the load.

Most of the product handled in BBJ’s machines, be it milk powder in Ireland, sugar in the UK or boxed fish in Holland, is headed for third-world countries where handballing goods out of a container is commonplace. However, BBJ have always been surprised how much travels this way to the United States and other more advanced markets. This indicates that the cost of labour at the destination is outweighed by the saving in space, pallets or other methods of manual loading at the point of origin.

Another concept complimentary to BBJ’s inverter are the Dutch-built RollerForks. A conventional forklift truck is fitted with two, three or four of these specially designed tynes which are equipped with dual sets of tiny rollers. The load, minus the pallet, is picked off the ribbed table of the inverter and driven into a container. As the truck reverses, the rollers work in opposite directions, one set going backwards on the container floor, the other causing the product to roll off forwards into position.

With any of these systems, the producer has the benefit of the use of conventional pallets in-house and the option to decide at the last moment which product is to be exported and by what method. This flexibility is the key to cost savings and to giving the customer the load in the form they want it.